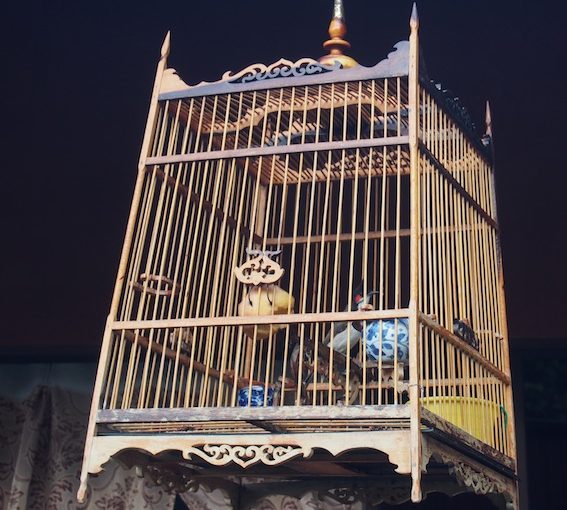 Why Bird in the House?

Penang, Malaysia, our second home for a part of each year, was settled by Francis Light of the East India Company in 1786.
Part of Georgetown, the city, was built on a swamp. Story has it that Light encouraged the settlers to clear the land by throwing gold coins everywhere and allowing them to keep what they found.
Over many years Penang saw an influx of immigrants from all over  Asia.
Today, with it’s mixture of race, culture and religions it’s unlike any other city in the East. In 2008 Georgetown was awarded Unesco World Heritage status. One of the reasons for this award, along with its living heritage was the fact that the city boasts the largest number of pre- war houses in all of South East Asia.
The majority of these are what are known as Shophouses, old Chinese buildings often used as a business on the ground floor and a living area on the upper floor. Unfortunately many of these houses became vacant with the passing on or relocation of the owners and were taken over, legally or otherwise, by entrepreneurial individuals who figured they could make some good money by turning them into bird houses for the harvesting of birds nest products. Products such as soup, and more recently for the cosmetic and health industries.

So, what they did was entirely close off the house and board off every door & window. One small opening, just big enough to allow the swifts to come & go was allowed and a recording of a fake bird call would be placed near the opening.
Over time the houses became blackened inside with the droppings of birds and the guano from the many bats that  set up their homes with the swifts. It seemed that in every street there was at least one or two bird houses and at certain times of the day hundreds of swifts could be seen circling above these houses after a night of feeding, ready to find their nests in what appeared to be a dark and humid cave. Perfect conditions for the breeding of the swifts and the harvesting of the bird’s nests, a very lucrative business.

The street next to ours had two Bird houses and every day I would watch the circling of hundreds of swifts. Bats too, often swooped close to our heads as we walked home late at night. Not that I’m a lover of these spooky little things but we did have one that used to hang from the rafters on our back terrace. We called him Raj after a certain Nepalese friend and would watch him chewing away at his bits of fruit and dropping the leftovers on our floor. I came in from the terrace one day after watching the swifts, listening to all the squarking overhead, and the Patient Partner was listening to music on his laptop. It was a darn sight better than the bird noises outside, and was also somewhat amazing timing. This catchy little song by Railroad Earth haunted me for weeks. I coudn’t get it out of my head.

I have worked in  Health Food shops for many years now and have had incredibly wonderful bosses that have allowed me to disappear to Asia for several months of each year. This is usually during winter as I hate the cold with a passion.  During that time the Patient Partner and I run small tours taking  unsuspecting friends and family with us to far distant places.

As a result there has been less shop work as I now share my hours with several other lovely staff who replace me when I’m galavanting around the world. This means I can spend more time at home doing some of the other things I enjoy such as  baking sourdough bread, making healthy guiltfree goodies for the P.P and me, reading, writing, and generally being………..

A BIRD in the HOUSE!!